Recently I received an enquiry to facilitate a Laughter Yoga session from a primary school teacher of grades 5-6. She went on to ask me to share a few words about how I both became involved in Laughter Yoga and the history of the laughter club movement. It seemed like a good idea to expand a little in a blog post and hopefully this is of interest to you.

The year was 1995 when it all began, the origin of the Laughter Yoga Community Clubs, who practice ‘laughing for no reason’ all around the world. Indian Physician, Dr Madan Kataria was impressed by Norman Cousins’ book Anatomy of an Illness and the research work by Dr Lee Berk on the benefits of laughter to one’s health and wellbeing. Madan decided to field-test the impact of laughter upon himself and others, gathering with four friends in a Mumbai public park.

This happy little group had many bystanders, who quickly joined in and numbered over 50 after a couple of weeks. BUT, around that time it was discovered that either the jokes and humour ran out or became offensive. Dr Kataria went home to ponder if there could be a resolution. Otherwise he felt that trying to laugh together on a regular basis would simply not work long term.

Upon reviewing the research, there was a light-bulb moment! It was around the fact that the body cannot differentiate between pretend and genuine laughter, because both produce the same happy chemistry. Participants were amazed, the make-believe laughter quickly turned into real laughter that was contagious. Realising there were other ways to experience laughter than through humour, the group switched to role-play and other techniques to stimulate the importance of child-like playfulness.

That was 23 years ago, the first laughter club was born and as the saying goes, the rest is history. There are currently thousands of laughter clubs in over 100 countries around the world.

For myself 13 years ago in 2005, I saw people laughing loudly together on TV as a social activity and then heard that ‘the laughter guru’ was coming to Melbourne to present a Laughter Yoga workshop. I went along, met with Dr Kataria and was so impressed by how fantastic I felt, I straight away committed to doing the laughter club training and immediately thereafter started a laughter club.

My personal reasons were that as a young girl, adults seemed serious, stressed, upset and fearful, as if they had lost hope and life was a burden. From that awareness, I unconsciously chose to be young at heart and not let life beat me down. I kept it up as good as I could, to not get stressed out over work and adult issues. Sometimes people said I was like Peter Pan who was youthful, happy and an inspired person, living with faith and hope for the future, enjoying each day, one day at a time. Mind you, now I understand there is more to it than the simplified version of my earlier life, which was quite ungrounded. That was in part replaced as I learnt to stop judging unpleasant feelings and be authentic. Feelings are to be celebrated and not supressed, which is vastly different from the earlier me. Nevertheless, that is the story in a nutshell, as to why I was drawn to Laughter Yoga.

Disclaimer: Information shared here is intended to be supportive and from my personal understanding and experience. Advice given is general and as I am not a medical doctor, take no responsibility for how it is received 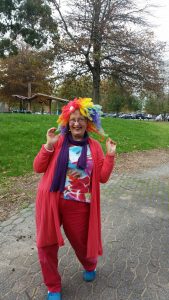 All information and data gathered on this website is securely managed and is not passed onto any third parties.

All information, pictures and material are the intellectual copyright of Lynette Mitchell. All contents on this website is subject to copyright law. We have no responsibility or liability for the content and activities of any third party linked sites.